If you’ve noticed the unassuming building in the heart of Cedar Mill, just north of the intersection of Cornell and Saltzman, you may have read the legend “Leedy Grange, Number 339” on a sign above the door. And if you’re like me, you may have wondered – what is a grange?

The dictionary declares it: An association of farmers, designed to further their interests, and particularly to bring producers and consumers, farmers and manufacturers, into direct commercial relations, without intervention of middlemen or traders. The first grange was organized in 1867.

The Grange is a fraternal organization similar to the Masons, but unlike many it has emphasized the full participation of women from the beginning. Like other fraternal organizations, there are rituals and ceremonies, and degrees to be attained. But for most members the social and community aspects of the group are most highly valued. 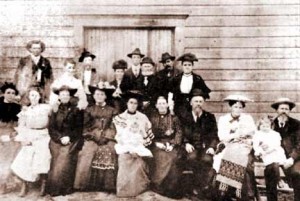 Leedy Grange #339 has remained active in the area since 1903. Named after B.G. Leedy, then president of the Oregon State Grange, its charter membership consisted of 29 local men and women. Initially they met in homes, schools and churches until 1913 when they purchased a two-story building along Saltzman Road from The Modern Woodmen who had constructed it in 1901.

It became the center for many community functions; in addition to Grange activities, other groups such as the American Red Cross Society, the Community Club of Cedar Mill and the Cedar Mill Garden Club were permitted use. By 1928 the Grange had a membership of 48. In 1929, The Beaverton Enterprise newspaper reported, “Wear overalls and ginghams and have a real good old fashioned time, given by the home economics committee of Cedar Mill Grange, Saturday night May the 18th at Cedar Mill Grange Hall, admission 25 cents.”

Dances were held upstairs on a polished floor. Dancers recall the building’s swaying and vibrating on especially lively evenings. Frequently Larsen’s Orchestra of Bethany and the Bud Knowland Orchestra played for dances and other events. Longtime local resident Ted Blatter recalls getting into trouble as a kid for spying on the dancers from the limbs of the huge oak that stood where Bales’ parking lot is now.

In 1925, the group passed a motion to install electrical lights. In 1929, $5,000 was invested to renovate the building. The structure was converted to a single story and a stage and kitchen were added as well as a new shake siding to the exterior. During the renovation the group met in the home of “Master” Burton B. Reeves, who had owned the Cedar Mill General Store from 1903-1913. [See article in February ’04 CM News]

According to the Hillsboro Argus newspaper the remodeling was provided by “volunteer labor, and funds raised through entertainments, plays and donations.” Pie socials, card parties, and dances were often organized to include the entire community. Just like in the musical, young women would prepare basket lunches which the young men would bid on.

Grange members continued to conduct their activities which included discussion and action on legislative and agricultural issues of current interest. Around the country granges established county extension agencies, supported the establishment of rural free delivery mail service and enhanced the political rights of women. Here in Cedar Mill in 1920 a committee was formed by the Grange to lobby for the paving of Cornell. They continue to lobby state and county government over issues of concern to the membership.

In 1938, Cedar Mill students attended classes in the Grange Hall while two new classrooms were being constructed. The Leedy Grange hall has continued to support the social needs of the community. Squaredancers held their dances there for many years, and when the Grange was in danger of closing for lack of membership, many of the dancers joined the Grange and kept it going. Local resident Barbara Getty remembers attending squaredancing lessons in the 1960’s. Many locals recall going to flea markets, bake sales and craft shows in the 1970’s and 1980’s.

When Saltzman Road was widened in 2003, the building lost its front porch and the entrance was moved to the north side. The old floor in the main hall is being refurbished and plans are in hand for painting the exterior of the building.

The basic configuration of the building consists of a large hall with a stage, and a big kitchen and a dining area. Rental information is available on this website.

Benefits of Grange membership include access to many discount services through both state and national organizations. Today, the Leedy Grange has a membership of 27 and continues to be a social gathering place and a forum for its members’ concerns. They welcome new members, and you don’t have to be involved in agriculture! Anyone interested in finding out more about Leedy Grange is invited to contact the current Master, Savannah Hively, by email.